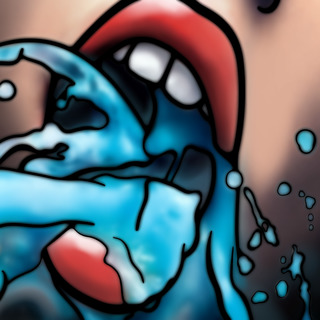 According to the final arbiter of all facts, wikipedia, "Some people say the QWERTY layout was created to slow down typing speed, while others say it worked by separating series of English letters."

40+ years ago, we generally intubated at risk patients in a head-down (Trendelenberg) position. The theory was that fluid pooled in the posterior pharynx (I just checked a manikin and the larynx is indeed anterior) where it was easily suctioned. Even if the puddle got deep enough to submerge the larynx, as soon as you caught up with suctioning, the fluid in the larynx drained downhill (gravity sucks) to your suction catheter. If you couldn't keep up, a lateral roll and your Crocs (Birkenstocks in those days) got pretty soggy, but the trachea drained.
We avoided the head up intubating position under the theory that if fluid was coming up one tube, the fluid looked for a downhill egress (gravity still sucks) and that was the trachea, not the mouth when the head was up.
When, a decade later, head up positioning started being mentioned, I tried it for a year and had my only (that I can recall) fatal aspiration - in a head up patient.
I returned, happily, to intubating in a head down position with 2 suction catheters in the posterior pharynx when needed. And continued until I changed careers this year.
There's precious little in the literature, though "Acute Intraoperative Pulmonary Aspiration" Katie S. Nason, MD, MPH, Thorac Surg Clin. 2015 Aug; 25(3): 301–307 includes only head down (doesn't even mention head up) positioning to prevent aspiration and sites a study (in volunteers!) (Combining head-neck position and head-down tilt to prevent pulmonary aspiration of gastric contents during induction of anaesthesia: a volunteer and manikin study.
Takenaka I1, Aoyama K, Iwagaki T., Eur J Anaesthesiol. 2012 Aug;29(8):380-5.) where 15 degrees of head down was required to prevent aspiration (no suction involved).
My old wives' tale is older (and I believe, better) than your old wives' tale.
The literature on this topic, along with gravity, sucks.
Head down.

Thanks for your comment. Yes, Trendelenberg positioning is a classic strategy in managing the fluid-filled airway, I used to talk about this when I would speak on the topic, and I'm glad you brought it up. Here's my thinking.

If there is a lot of fluid in the mouth of a patient without airway reflexes (eg paralyzed), you are better off in Trendy than flat or upright, for exactly the reason you mention, and this is not a small concern–if there is a ton of fluid in the mouth and that fluid goes down the trachea, it can kill the patient. So diverting that fluid away from the trachea, using head-down positioning, is a powerful maneuver. So why did I stop talking about it?

But most importantly: head-down positioning **makes regurgitation more likely.** So, excluding fluid-in-the mouth scenario, head-down is a clear loser, for the reasons above. Considering fluids, it's a plus/minus. Head-down makes fluids in the mouth more likely, which is very bad, but if you have fluids in the mouth, head-down directs those fluids away from the trachea, which is very good.

I am convinced that routinely intubating head-down is the wrong approach, from a game-theory perspective, based on the considerations I've just outlined. In high fluid risk patients, I think (not convinced) that employing the strategies I described in the audio segment provides the best set of plusses, compared to minuses. However there is a circumstance when head-down *should* be used, and that is, in a patient without airway reflexes who has a massive regurgitation event that will exceed your ability to immediately clear with suction or fluid diversion (using an esophageal ETT). In that case, it is wise and possibly life-saving to immediately get the patient as steeply into Trendelenberg as you can. The problem is that putting the patient into Trendy requires access to the SIDE of the bed, where those controls are; simply lowering the head to flat positioning isn't adequate. In a pinch, can you get someone to get push that Trendelenberg pedal while you lower the head? Or should you just focus on clearing the fluids. At one point I made the case that for high fluid risk patients, the bed should be put deeply in Trendelenberg prior to commencing airway management, with head up for usual ETI, but then if there's a large regurgitation event, the operator can quickly lower the head to "flat" which, because the bottom 2/3 of the stretcher is steeply in Trendy, would get the patient into the best position to clear large volume oral fluids as soon as you can get the head down.

So this gets pretty complex and when you start describing these very detailed scenarios people lose interest/attention, so I stopped talking about it. But maybe I shouldn't have. Appreciate you bringing the concept to this forum.

Correct me please if I am misunderstanding my physiology - but I thought the stomach wall musculature was smooth muscle, and therefore not blocked by NMJ blockers like rocuronium (which block striated muscle), and therefore vomiting is still possible?

Interesting - I've never heard that. Certainly, clinically, it does not appear that paralyzed patients vomit, however it is possible that smooth muscle contractions contribute to what we perceive as passive regurgitation. Regardless, I think it is clear that patients are less likely to regurgitate/vomit when paralytics are used.