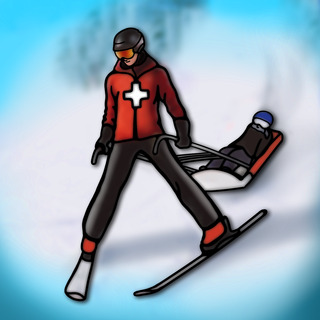 Cardiac Arrest on the Ski Slopes

Your humility and willingness to help out where needed was a delight to hear. This is a great reminder of our capable and well trained our pre-hospital colleagues.

For those physicians who are interested in helping with austere care, consider volunteering through:
National Ski Patrol - volunteers usually commit to work something like 10 days per ski season as an additional ski patroller in exchange for discounted tickets and/or season pass
local Search and Rescue - volunteers in your local community who are called on day (and usually night) to help fellow community members

Their abilities are amazing and they are an inspiring bunch.

In 2007 I had a similar case while skiing at one of Colorado resorts with a friend of mine. She was volunteering as a "Medic on the Mountain" when we heard a call over the radio of a "man down" near a certain chair lift. We just happened to be several hundred yards away from the reported location, and when we arrived we found a man lying in the snow with a bystander performing CPR. Over the course of the next hour my friend and I (both paramedics), a cardiologist and a anesthesiologist (both just happened to ski by and stopped to help), and about a dozen members of ski patrol who assisted with CPR and retrieved equipment (EMS Bag, AED, Medication) that seemed to be spread all over the mountain, worked seamlessly to resuscitate this individual. It was a beautifully orchestrated team effort made up of complete strangers all working together for a good outcome. Ultimately, this man was resuscitated on the mountain and was conversing with us before being flow to the closest cardiac center 30 minutes away where he received an AICD and was back up skiing just a few week later. I will always remember that day when a group of complete stranger rose to the occasion, adapted to far less than perfection circumstances, and sent a man home to his family. ~ Excellence through collaboration.

As ski patrol provides medical care in a unique environment, I wanted to provide a little more background. The case you highlight is somewhat unique for several reasons. The majority of ski patrols provide BLS care with a minority having ALS providers and equipment. Although cardiac arrests and other medical calls do occur on the mountain, the vast majority of cases are orthopedic injuries and blunt trauma.

I thought Dr. Horowitz asking if he can provide assistance was excellent. Ski areas in the U.S. have patrols with protocols and specialized equipment so coming up on a scene in a ski resort is similar to a scene where EMS is responding. Some scenarios may benefit from trained medical personnel acting as good samaritans, such as this case. Other cases, such as trauma with only BLS equipment available, the patrollers will be better trained at rapid packaging and transport using their specific equipment. I certainly cannot recommend everyone follow ski patrol to accident sites in case you may be of help, as skier traffic can be a safety concern for the patient and patrollers.

I played the segment to my wife, who is a pro patroller, and she agreed that there are often cases where an additional set of trained hands can be helpful, particularly cardiac arrest. She emphasized that it is important to ask if your assistance is needed before entering the scene.

I am glad to hear of how well the team worked on this case. This fits with my experience that ski patrollers provide excellent care often in very difficult and dangerous conditions. For context, I have a total of 14 years of ski patrol experience with 7 years as a pro patroller, 2 as a volunteer patroller and 5 years on a volunteer physician patrol where I am currently active.

Thank you for all that you do, I love the program and enjoyed hearing the successful ski slope resuscitation story.

EM:RAP staff, this message is in response to the inspirational story told by Dr. Horowitz "Cardiac Arrest on the Ski Slopes".

A resident I work with approached me today during a shift, "Peters, did you listen to the January EM:RAP? It's that story you told me about the guy that arrested in Colorado, the one you intubated on the mountain!"

To supplement the story, here's what happened before Dr. Horowitz's arrival.
My wife, also a physician, and two kids, 10 and 13, were at the top of the gondola on the perfect ski day. As we proceeded down the hill I saw a skier laying in the snow about halfway down, maybe 200 yards away. There was man wearing a yellow coat standing over him talking to him. Fully expecting, and hoping, he had fallen and broken his leg, I got a little closer and it quickly became apparent he was unresponsive with agonal breathing. Off came my skis, I held his airway open while Mr. Yellow coat said "I got this" and started compressions. We shouted for help and the call went up the mountain in the direction of the ski patrol hut. The compressor was singing "Stayin' Alive" to himself, no kidding. My kids were 10 yards above us and X-ed out their skis in the snow so we didn't get skied over and my wife took over Mr. Yellowcoat's well intentioned but tummy-rub brand of CPR. The next 4-5 minutes went slowly but ski patrol showed up, with an AED in a pocket (!). The patient was defibrillated twice, I got to intubate him in the snow, and you know the rest. My family and several ski patrollers stood on the medically-littered mountainside after the patient left. We all noted how smoothly the resuscitation went and how such an impromptu team functioned so well together. The first responder who had the guts to stop and investigate (and take a CPR class), the ski patrollers, three physicians, and critical equipment all culminated in obtaining ROSC on the mountainside.

I completely echo and agree with Dr. Horowitz's sentiment of calm and efficient teamwork in an environment very foreign to me, truly a reminder of what a tough job our EMS colleagues have. By virtue of what EM physicians do every day, it takes a lot to impress us. That ski slope experience is one I won't forget.