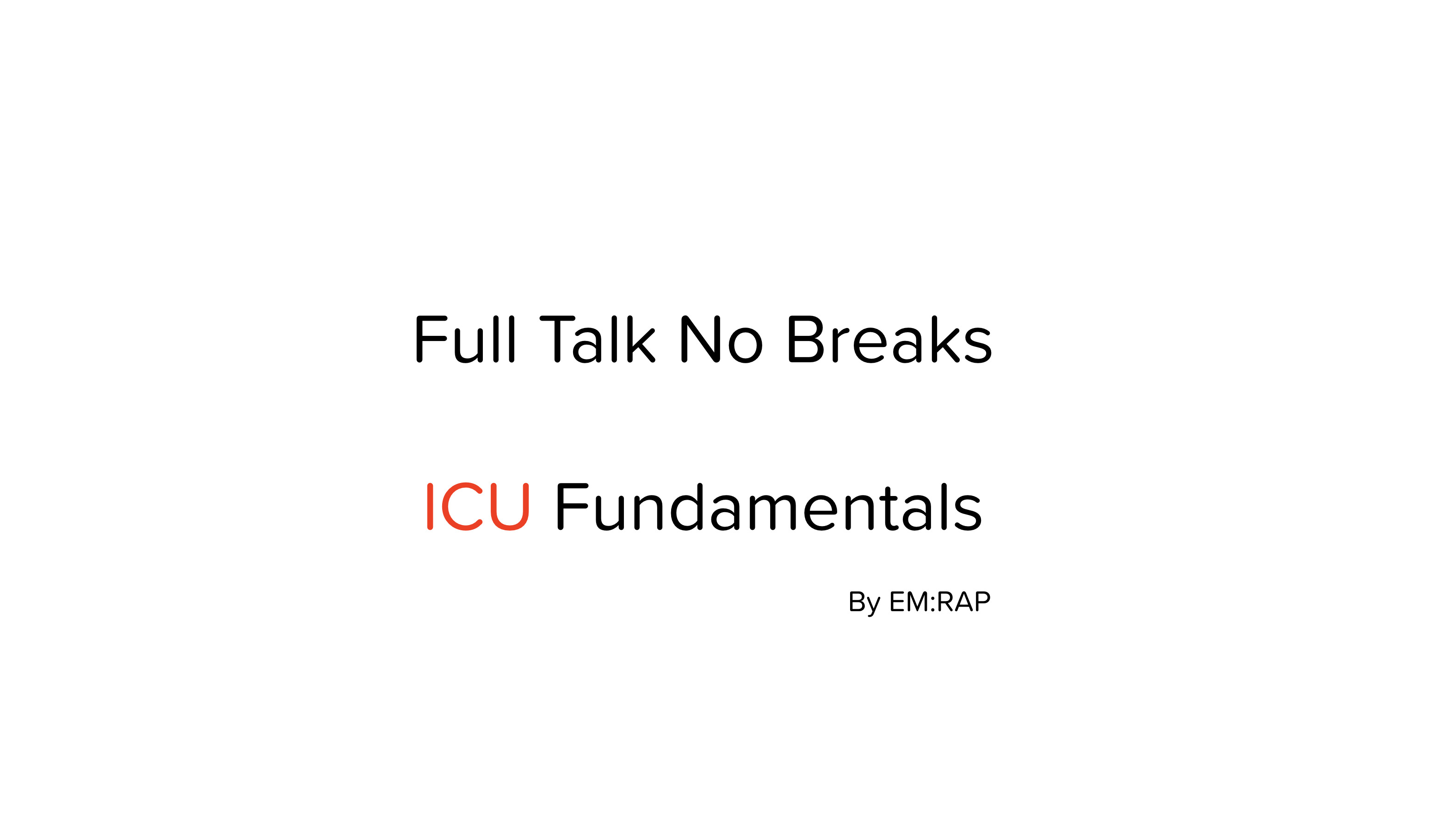 The full acid base talk in one wonderful showing :)

Really enjoyed this! Thanks keep up the good work you're doing.

Great job! Look forward to more discussions from you.

Amazing!!!!!. questions.
I need to read more about the strong ion difference.
When giving NS, don't the strong ions increase equal? If not is it because the sodium excretion by the kidney shifting the concentration?
When the body produces the extra H+ ions to oppose the Cl- ions doesn't it also produce a bicarb in the same process? Why does the extra bicarb not buff the ph?

Watched this talk, then had a really sick patient with a bad acid base problem. This lecture helped me easily work though the patient's issue and prove to the MICU residents why the patient was "looking over the cliff." Really enjoyed the lecture!

So glad that this was able to help out with real time patient care!

This lecture was excellent. I have a much better understanding of acidosis and its management thanks to these videos. Please make more lectures in this "Fundamentals" series!

Several of the blood gas examples in this talk don't make sense in that they are physiologically impossible based on the Henderson-Hasselbach equation. If these are actual readings from a machine, your machine is making calculation errors and the lab supervisor needs to be made aware. These values should not be used to make medical decisions, nor should they be used as examples when teaching fundamentals.

If these values are just made up examples, you should check to make sure they make scientific sense before using them in an educational talk.

For example, in the section discussing using Winter's formula: if the CO2 is 20 and the pH is 7.2 (as measured by the machine), in real life the bicarb would calculated by the Henderson Hasselbach equation (ie the machine) to be 7.5 (not 10).

These details may seem inconsequential but they damage your credibility as an "explainer" or teacher of acid-base disorder and are confusing to learners. Below is a good online calculator that you might use in the future to check your examples and to make sure they are scientifically accurate. https://ebmcalc.com/HendersonHasselbach.htm

Hi Eleanor, I really appreciate you taking the time to write this. When I was constructing this lecture, I debated whether to discuss the case essentially as it had happened (with lots of messiness, using the HCO3 numbers from the BMP, etc), or whether to simply calculate hypothetical numbers. I decided to favor the former, which may or may not not have been the right approach. The example to illustrate the CO2/last two digits of pH concept was completely invented, and in that example the HCO3 should certainly have been around 8 rather then around 10; I had picked a close round number to try to make it easy to visualize the point of the example with minimal ‘noise’, but I think that you are right and that ~2 point difference in HCO2 was probably ultimately more confusing to students than helpful. With regard to the case itself, you can see with the first ABG screenshot that, from the very beginning, the numbers didn’t strictly match up with Henderson-Hasselbach. In that first example, if we use the BMP HCO3 of 2, the pH per Henderson-Hasselbach with a HCO3 of 2 and PaCO2 of 10 should be around 6.90, not 7.02. In a bigger picture way, even though Henderson-Hasselbach is the main method of teaching acid base, it isn’t always a perfect descriptor or predictor of acid base disorders in clinical practice, and it’s explanatory power can sometimes be limited in the face of the broader range of variables that play into acid base status in vivo, even aside from imperfect sample collection, machine calibration, states of very profound physiologic disturbance, etc. As in the case of the first ABG, even if the numbers we are presented with clinically do not match up precisely with Henderson-Hasselbach, we can still make sense of the overall clinical situation. What I was hoping to achieve here was not to have people calculate the math of acid-base per Henderson-Hasselbach because that is an exercise that most people have already gone through a number times during their training, but rather to attempt to talk about the clinical significance of certain bigger picture patterns and trends in a patient’s acid-base status. On the one hand, I did want to make the point (as I tried to make explicitly with the first ABG screenshot) that even though real patients scenarios and numbers may be messy, you can still get an understanding of the most important aspects of the bigger picture clinical situation in a way that guides your management. But that all being said, your points are very valid and I do recognize that I could have made this talk better by adjusting the numbers to be more congruent with hypothetical values while continuing to use the real case as a base in order to help avoid adding any potential confusion for students in an already confusing topic. This is something that I can be sure to do in future acid-base segments. Hopefully this series will get better slowly as we go, and I really appreciate your ongoing feedback.

This talk is excellent, thank you! I'll definitely be coming back to it to review and solidify these concepts.
Can't wait for the next ICU fundamentals topic!

I’ve finished my EM training, had heart about the SID, but this is the 1st time that I’ve actually understood. Life and practice-changing lecture! Congratulations on being a great educator!

great lecture!! It will definitely change my practice in the ED.

Sara I would not sweat the Henderson Hesselback equation values giving a value that was off 2 points. As clinicians the value of your talk really is in the concepts and you got them through well...very well. Thank you for yet another fantastic series.